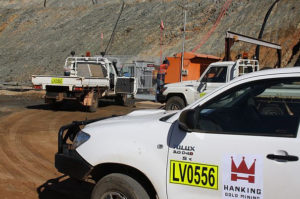 Article by Brian Hardestie of Hanking Mining: Late in 2015 in my position of Hanking Mining’s Senior Surveyor, I contacted SITECH WA to request a trial of their Global Navigation Satellite System’s BeiDou Constellation upgrade for our narrow and deep gold mine in the Southern Cross region, Western Australia.

BeiDou is the Chinese Satellite Constellation that travels mostly over Australia and in particular over WA so is perfect for use in a deep Western Australian mine like ours.

At Hanking we are operating several narrow open pit cutbacks, some of which are well advanced and over 100m deep.  The effective elevation mask when surveying at the base of one pit is approximately 45 degrees on three sides, and up to 50 degrees against the walls.  This has presented some issues having sufficient satellites “in view” to obtain an RTK fix.  More often than not there are insufficient satellites available, requiring the surveyor to return later in the day, or carry out the task with a conventional total station.  Either way, time is lost.

Earlier in the development of the mines GNSS system I had contacted SITECH WA to discuss the potential benefits of the system. They informed me that I could expect to see at least 6 and possibly eight additional satellites on any given day on the floor of the mine. The only criteria was that I had to have both a Base Station and a Rover with BeiDou installed but the cost was around the $2K range per receiver so was cost effective in comparison to other alternatives.

SITECH WA's Business Development Manager, Brad Dalton paid me a visit at the mine and provided a loan GNSS kit that I tested over various times during the week and true to their prediction the number of Satellite’s I accessed with BeiDou enabled went up markedly. The average number available at the base of the pit increased by at least 6 to a total of 12-14 where previously I had no more than 4-8 and constant drop outs.

It is my belief that for our mine BeiDou is a perfect and cost effective solution for the deep and constrained nature of our mine and I wouldn’t hesitate to recommend its use to any other mine out there that is looking for a more robust GNSS solution.